This is a Skin for Monsterhearts 2 by Avery Alder.

When people look at you, they see perfection. They see elegance, grace, poise. You could bask in their adoration all day—but that’s not enough. You need them to love you—no, you need their utter devotion. It doesn’t matter that you’re a flighty creature, that you’re afraid of trust just as much as you need it, that your beauty is both your armor and your curse.

You’ve been burned before, but you know without a doubt, that this next one will be forever.

Faithful/faithless, trusting/jealous, guileless/manipulative—always beautiful. The Swan knows what it is like to be betrayed and they know that promises of true devotion are just as easily broken as they are made. The Swan wants the love of others and will seek it by any means necessary. The Swan understands that the image of vulnerability can be a strength in itself.

The Swan is inspired by Tchaikovsky's ballet Swan Lake. Swan Lake is the story of Odette, a woman who is cursed to spend her days as a swan until another swears to love her forever. Oftentimes the parts of Odette and Odile, the woman who is enchanted to look exactly like Odette and woo away the prince who stands a chance of breaking Odette's curse, are danced by the same person. This Skin began with the thought, "But what if these two are really two sides of the same coin?"

(content warning for suicide in the summary of the ballet)

(The original image used is a picture of Yuka Ebihara dancing Odette for the Polish National Ballet, by Ewa Krasucka TW-ON, CC BY-SA 4.0, via Wikimedia Commons. The layout was from Avery Alder.) 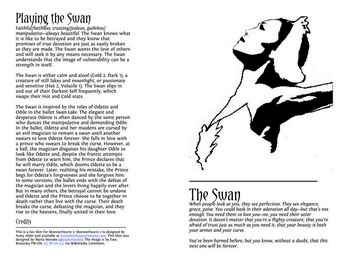 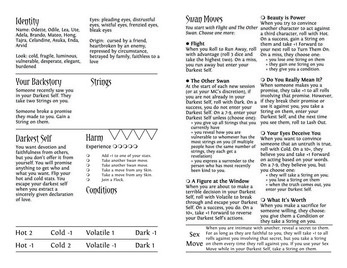